Seventeen years after the retirement of the Concorde, a small fighter-like aircraft nearing completion in Colorado is set to blaze a trail toward development of the first purpose-built civil supersonic airliner of the 21st century. 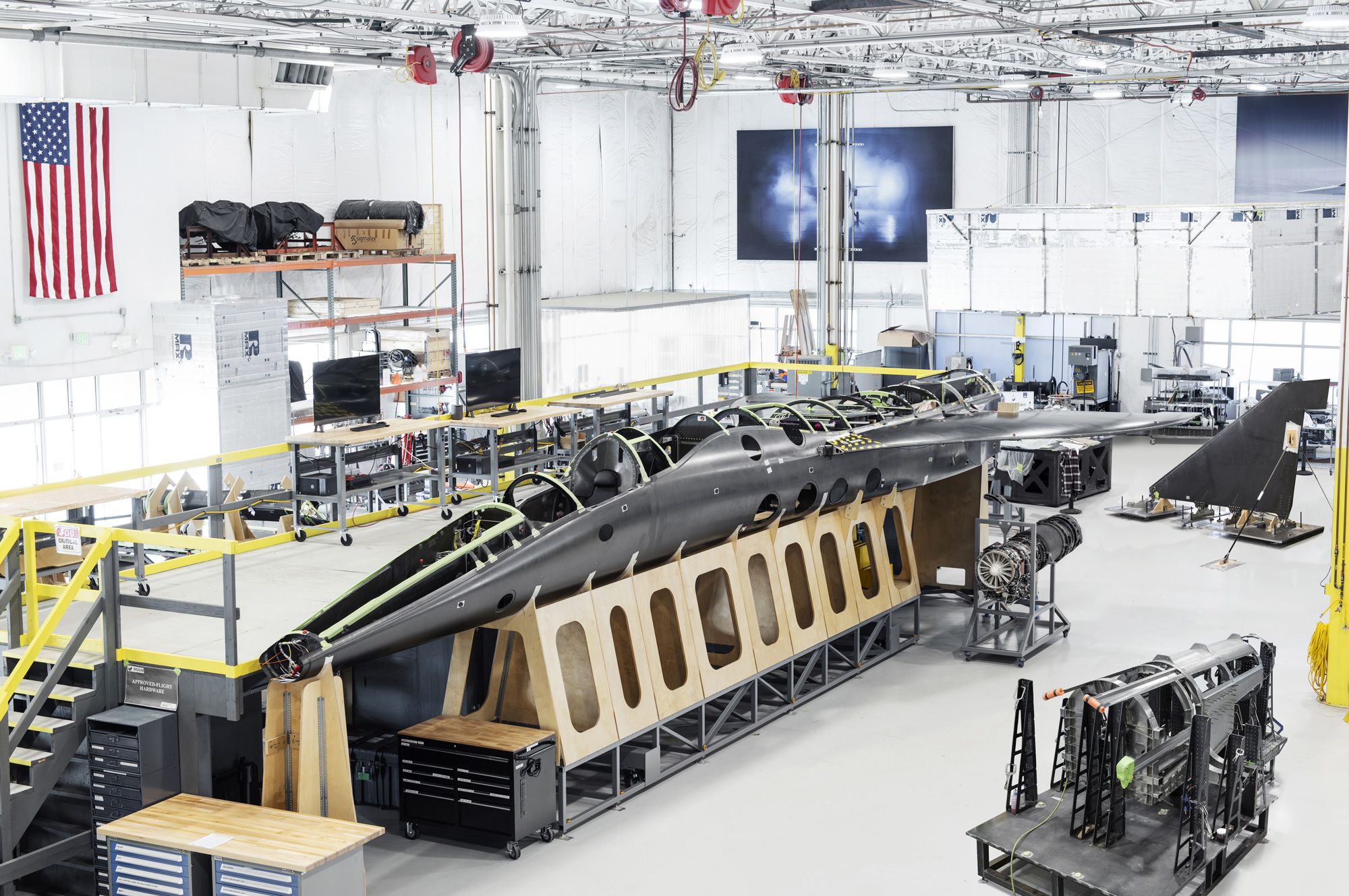 Boom Supersonic’s XB-1 is a one-third-scale demonstrator for the Overture, a follow-on 75-seat airliner it aims to introduce into commercial service later this decade. Although inspired by the Concorde, the XB-1 displays key technology differences that Boom believes will enable the Overture to operate economically and sustainably at Mach 2.2—targets out of reach when the pioneering Anglo-French airliner left the drawing board more than a half century ago.

The XB-1 shares some Concorde-like features, including a slender nose, elongated forward fuselage and graceful ogival delta wing. But unlike the Concorde, the wing is mounted on the upper fuselage and predominantly made of lightweight carbon-composite materials rather than special aluminum alloys. The XB-1 is also a trijet, and its tail-mounted engine is fed by a dorsal inlet, marking another significant departure from the Concorde’s twin-podded quad-engine configuration.

Despite a slowdown caused by the COVID-19 pandemic, progress continues toward final assembly of the demonstrator inside Boom’s Centennial Airport facility in Denver. “The first upper skin is going onto the fuselage, and we are in the process of closing that out,” says CEO Blake Scholl. “The vertical tail is in structural testing, and the landing gear is getting drop-tested. So we’re basically testing every single component as it goes onto the aircraft and then doing integrated testing as well.”

Once complete, the aircraft will be officially unveiled later this summer before being prepared for system checks and ground tests—including initial slow-speed taxi trials—at Centennial. “Sometime around the end of the year, possibly early next year, we’ll be taking it down to Mojave, California. And we are still looking to be in the air next year,” he says. Testing will be undertaken with Mojave-based Flight Research Inc. (FRI) a training, service and support company with which Boom announced a strategic partnership in January. FRI’s supersonic T-38 will provide pilot proficiency training and will also be used for chase support during XB-1 flight tests.

“For safety, we have to have a long and wide runway and be based close to test airspace, so it makes a lot more sense to do flight tests in Mojave,” says Scholl. Under the agreement with FRI, Boom is also subleasing part of the company’s flight line facility for an XB-1 simulator, a flight-test control room and hangar space for maintenance and support of the demonstrator.

“The XB-1 is very much informing the design of the Overture,” says Scholl. “The goal is mainstream supersonic flight for as many people as possible in as many places as possible. So we started out with a sketch of what the Overture looked like and then said, ‘OK, let’s put that on the backburner; let’s go shrink it down about one-third scale, and then go through the design, build, fly and learn cycle.’ We did this knowing that when we went through that process, we’d shift our attention back to the Overture to take everything we’ve learned from the XB-1 and use it to update and improve a richer design. So that’s exactly what’s going on.” 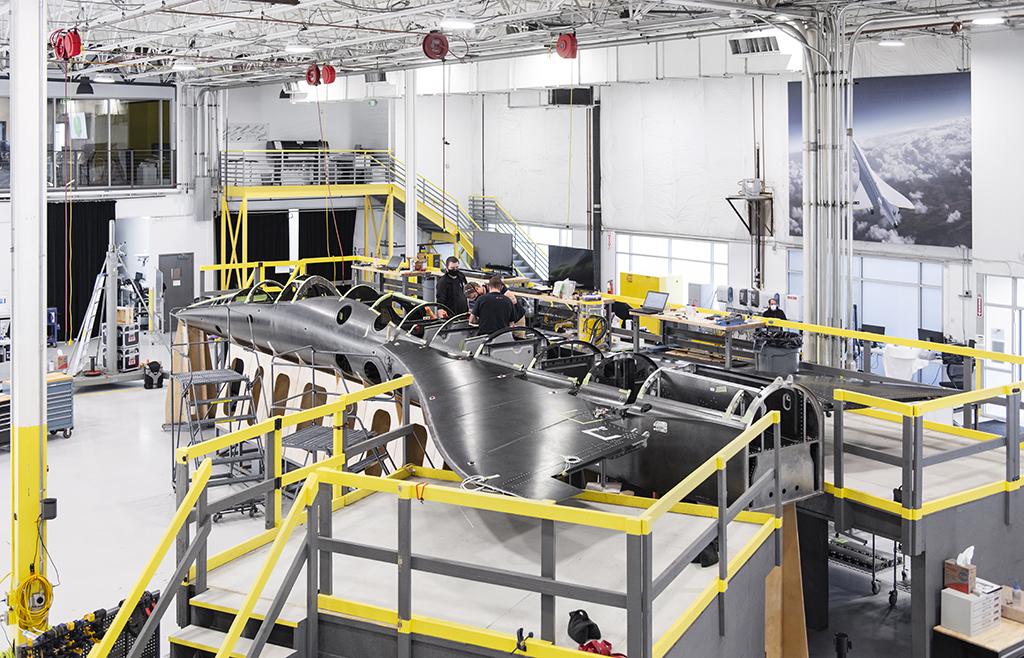 With a wingspan of 21 ft. and overall length of 61.5 ft., the XB-1’s proportions are similar to the slightly shorter Lockheed F-104 Starfighter and the longer Douglas X-3 Stiletto supersonic research aircraft of the 1950s. The aircraft’s slender, low-drag delta wing is designed for supercruise performance and at lower speeds will generate vortex lift to allow an acceptable angle of attack for landing and takeoff.

With its small wing and complete absence of lift-augmentation devices, Boom estimates the XB-1 will have a sporty final approach/reference landing speed of around 185 kt. To handle high runway speeds, the nose landing gear is strengthened to withstand descent velocities in excess of 13 ft./sec., while the titanium main landing gear bulkheads are built to withstand impact forces of 112,000 lb. Loads will be transmitted into the composite fuselage structure, the largest part of which is a 47-ft.-long fuselage skin section.

Two-dimensional, fixed-geometry supersonic inlets are mounted close to the fuselage beneath the wing and, together with the center inlet, transition flow through subsonic diffuser duct sections to the three closely grouped General Electric J85 engines in the tail. The center inlet, which is mounted on a prominent boundary layer diverter above the aft fuselage, feeds air through a longer S-duct.

For the Overture design, which will be firmed up within 24 months, the engines will have variable--geometry inlets and be mounted farther outboard while, according to current renditions, the tail engine will feature a divided inlet with openings on either side of the aft fuselage.

The three XB-1 engines, which collectively generate 12,300 lb. thrust in afterburner, are housed in an aft-fuselage assembly made completely from heat-resistant titanium. Small movable horizontal tails are attached to the lower aft engine nacelles to provide pitch control. Boom confirms that the horizontal tail will not feature on the Overture, which will be designed with a chine and a larger, conventionally mounted delta wing. An elongated conical tail cone extends aft of the vertical fin to reduce afterbody drag, particularly during transonic flight. 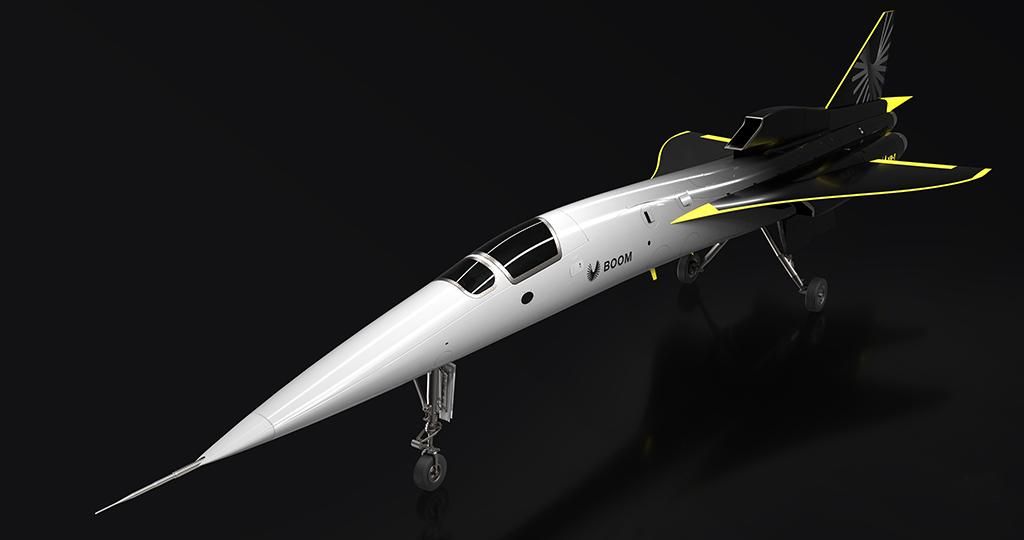 Even though the XB-1 is still months from completion, Boom says the experience of designing, wind-tunnel testing and building the demonstrator has already helped guide design refinements to the Overture. “There’s a tremendous amount we have learned about aerodynamic optimization,” says Scholl. “In particular, how you balance low-speed and high-speed performance, how you trade your high-lift devices into the wing and how you balance high-speed efficiency with the ability to meet noise rules for takeoff and landing. We have better ideas on that now than we had a few years ago.”

With the design of the XB-1 finished and assembly underway, “the engineering center of gravity at Boom is shifting from the XB-1 to the Overture, which is due to begin flight tests in the mid-2020s,” Scholl says. “And with that we’re taking a second pass with the overall vehicle design with the Overture.” Although he declines to be more specific about potential changes, Scholl adds: “There’s just a lot you can do to make the Overture better, but it will be a little while before we’re ready to unveil what’s to come.”

Major configuration choices—such as adoption of a trijet layout—are “absolutely still on the table,” says Scholl. “That’s one of the real advantages we have with the XB-1. We will not be completely finalized with the Overture until we have flown the XB-1, and the calibration data we get from that deletes a lot of uncertainty. It is an enormous benefit to have flown a similar configuration demonstrator aircraft: You’ve learned where your assumptions are right and where they are wrong, and you’ve got data that you can carry forward to make sure you develop Overture the first time around,” he adds.

“The XB-1 is a critical step toward mainstream supersonic travel,” says Brian Durrence, senior vice president of Overture development. “It’s going to provide, and is providing, key technologies to help us move to safe, efficient and sustainable supersonic travel. There’s really nothing like flying hardware to take designs and working knowledge to the next level.

“For example, the design tools that we utilize for the XB-1 are the same tools we’re planning on utilizing for the Overture. For critical parts of the aircraft, such as the inlet, it will be great to be able to get advanced information on that and get a direct match of that performance. Then maybe we will know if we need to adjust our tools and methodology slightly in order to maximize the efficiency,” says Durrence.

Flight testing will, for instance, verify Boom’s methods of controlling wave drag and shockwaves. “It is a very important piece of the puzzle to make sure that we have the strongest tools and methodologies available and that these are backed and verified with test data,” says Durrence. “Every piece, not just the design part, of the XB-1 program is a valuable learning experience for Boom.”

Unlike NASA’s X-59 low-boom experimental aircraft, under assembly by Lockheed Martin, or the AS2 supersonic business jet in development by Aerion—which aims to use an atmospheric phenomenon known as Mach cutoff for boomless overland flight—the Overture remains point-designed for unrestricted operations over water. “The strategy remains the same,” says Scholl. “We’re focused on transoceanic routes where we can offer a big speedup for as little cost as possible with proven technology and the shortest possible development timeline.”

Scholl concedes that low-boom technology has a future. “[But it will be] a long time before anyone knows how quiet is quiet enough,” he says. “The last thing you want to do is make a big investment in it, and then miss it by a decibel and then all is for naught. You also give up efficiency for quiet. So we are still more convinced than ever that there’s a meaningful market for transoceanic [travel] where the most important thing is efficiency and low-boom doesn’t really help you.”

Instead, as part of its drive for environmental sustainability, Boom’s noise aspiration is to meet International Civil Aviation Organization Chapter 14/FAA Stage 5 landing and takeoff noise standards with margin, which it believes will also meet the FAA’s proposed standards for new supersonic aircraft. As proposed for initial designs with a maximum takeoff weight no greater than 150,000 lb. and a maximum cruise speed up to Mach 1.8, the standards—known as Supersonic Level 1 (SSL1)—do not cover the larger and faster Overture. However, Boom expects to work with the FAA using the SSL1 standards as a starting point for establishing an individual certification basis for the Overture.

“Overture will be the first new commercial aircraft to have been built with environmental and economic sustainability in mind from Day 1,” says Scholl. “[That includes] everything from the engines being designed to accept a wide variety of alternative fuels through looking at how to design the aircraft for recycling.”

Boom’s plans to work with California-based Prometheus Fuels on a carbon-neutral fuel received a boost in June when the startup received an investment from the venture-capital arm of carmaker BMW. Boom partnered with Prometheus in 2019 for the supply of fuel for the XB-1, which will be produced using a process in which CO2 is captured from the air and converted into a liquid fuel using renewable electricity.

However, hurdles still face Boom’s fuel plan. “The biggest challenge we have with respect to sustainable fuel is that we just can’t get enough,” says Scholl. “There are a lot of promising concepts out there, but nothing that reaches industrial scale.”

Another key challenge is the selection of engines. “We’ve narrowed things down a little bit, but we’re still looking at a couple [of] options,” he says. Although no details have been released, Boom is discussing medium-bypass, nonafterburning engines based on derivatives of current turbofans. Earlier, the company disclosed it was studying two promising candidates, one based on a military core and the other a commercial one.

Despite the debilitating impact of the coronavirus pandemic and economic slowdown, Boom remains “in a great cash position,” says Scholl. “That’s allowed us to continue and, in many cases, even accelerate what we are doing.” This includes recruiting additional personnel as it shifts gears toward the Overture Part 25 certification design, as well as to open talks with more suppliers. “As Boeing and Airbus have retrenched, it’s created a good hunger in the supply base, and there’s more room for new entrants to actually speed up what they’re doing,” Scholl says.